During a family day out this summer we came across a little shop that sold MDF laser cut embellishment kits for scrapbooking & other projects. Among the items were several Christmas ornament kits & a teeny tiny house kit. I made a mental note of the name of the company & as soon as we returned home I went straight on the computer. The company is called 'Twiddleybitz', http://twiddleybitz.com.au & they sell a wide range of scrapbooking embellishments & kits, including this... 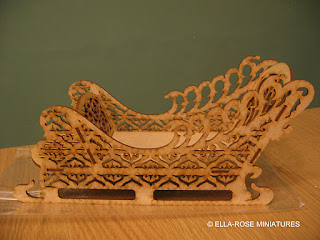 ...a 1/12th scale Santa Sleigh. I have wanted to make a Santa Sleigh for many years, but have never found one to my liking, until now. Unfortunately they do not ship to the U.K. & it did take me a while to find a distributor in the U.K. where I could purchase it from> http://www.craftynotions.com ,I ordered it late afternoon on a Tuesday & at 9:30 the next day the postman had delivered it!! Very impressive service. It was quick & easy to assemble as all the pieces slot together & I then strengthened the joinings with wood glue. I then began painting it, which I will admit would probably have been a lot easier if done before assembly as there are a lot of fiddly little bits to fill in. 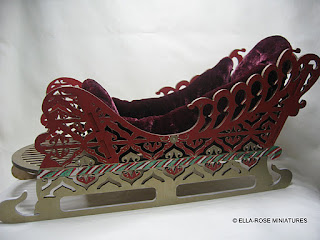 I made some deep red velvet cushions that will line it & it is to be filled with assorted toys & santa sacks & eventually a Santa. This will be coming with me to the remaining fairs for this year. 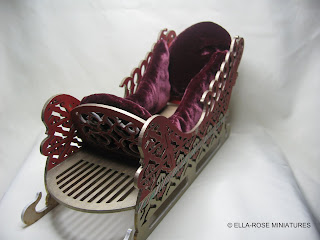