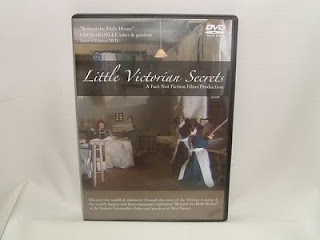 It's not very often that the postman brings me a surprise, usually bills or bank statements, so I was surprised after hearing the letterbox rattle & a soft thud landing on my doormat. Upon investigating I found a jiffy envelope with a sticker on the back saying 'Fact Not Fiction Films', my hands trembled with excitement as I opened it, as I had already guessed what was inside!!
In November while exhibiting at Kelham Hall, Newark, I had been asked by a film crew if they could interview me for a documentary called 'Little Victorian Secrets', & a few weeks after that I received an e-mail inviting me to the press release private screening of the finished film. Unfortunately I could not attend as it was too far for me to travel with my spinal problem, & I thought that would be the last I would hear from them. But then last week a package arrived for me...a complimentary copy DVD of the finished film!! I resisted for a whole 5 hours before sitting down, by myself, with a cup of tea & watched it. It is mainly filmed at Leonardslee Lakes & Gardens which has the most amazing dollhouse & miniatures exhibition & includes interviews with various miniaturists...including me!! It is a fascinating documentary & can be bought from 'Fact Not Fiction Films' website under the documentary films section. If you do happen to buy a copy please let me know what you think of it :o) Have a great week.x.
Posted by Kerry at 15:10 4 comments: 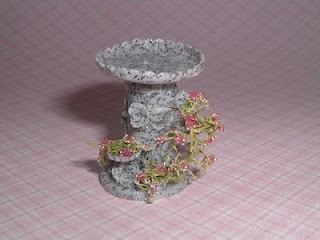 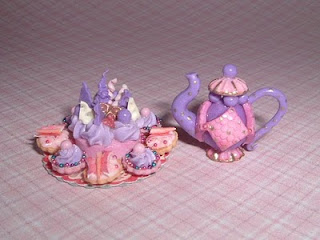 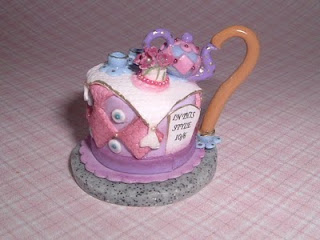 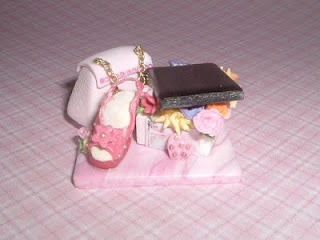 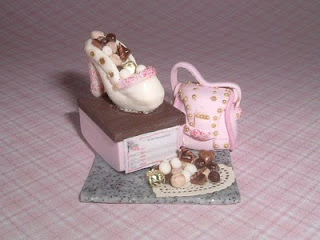 I have a terrible addiction!! I am addicted to making miniature cakes & just cannot make enough of them at the moment. The main reason for this is that I will be celebrating a BIG birthday in August & am frantically searching for an amazing cake for the centrepiece for the buffet. At the moment the plan is to buy it from the little chocolatier shop in Louth, Lincolnshire (mentioned in a previous post), but in the meantime I am searching the web for other options. Most that I have found are in the U.S.A. & I don't think it would be practical to have one shipped over, LOL, so I am still searching for one in the U.K. that will be able to deliver. The only other option is that I make one myself (eeeeek!!!!) but I don't think I would be up to it, plus there will be too much for me to do on the day as it will be a 70's themed party, so I am also on the look-out for lava lamps & disco balls. Anyway, here are a few of the items that I have been making this week & will be going up for auction on eBay next week. Have a great week :o) .x.
Posted by Kerry at 10:42 8 comments: